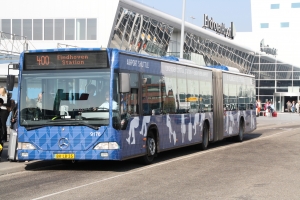 The roads around Eindhoven Airport are increasingly full of roaring vehicles. To tackle the traffic, the airport, together with the Province, the Dutch Railways and bus company Hermes, also aims at public transport.

For those who had to be at the airport early in the morning, public transport was never an option. But the timetable for buses is being adjusted so that early travelers can still get to the airport around half past five in the morning. There will also be a ‘mop bus’; a last bus that still transports travelers and Airport employees around a quarter past twelve at night.