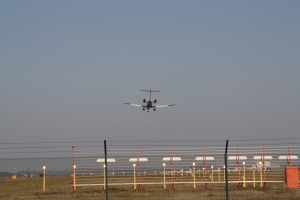 A coastguard aircraft suffered a blowout on Monday afternoon, June 8, 2020, when landing at Eindhoven Airbase. The two occupants were not injured.

According to Eindhoven Air Base it is thanks to the skill of the pilot that the aircraft has come to a safe stop. Emergency services initially turned out big. For example, a trauma helicopter was called up, but the help proved unnecessary. Because the plane is on the runway, it is no longer possible to fly to and from Eindhoven Airport on Monday.