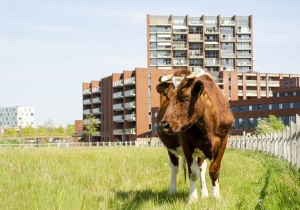 The cows that grazed in Park Meerland last summer and autumn have recently been expanded into families. In their temporary winter residence in Liempde they gave birth to two healthy calves.

Anita Liebregts, actively involved with Stichting Beheer Park Meerland: “We knew that one cow was pregnant and that this cow would give birth at the end of December. The second cow was slim and you could not see if she was pregnant, even the farmer did not know. The big surprise was on December 13, both cows had probably given birth to a beautiful healthy calf on December 12. The farmer found them in the meadow on December 13 in the morning. Partly thanks to our green meadows, the calves have been able to grow well in the belly of the cows. ”

Park Meerland
At the start of the winter period, the owner takes his cattle back from the meadows and nature areas because the grass does not grow in the winter. The cattle then reside in the outskirts of Liempde, on cattle farm De Toom. In April 2021 new cows and their calves will come to Meerhoven. Liebregts: “We are going to welcome them with open arms and enjoy them immensely”.