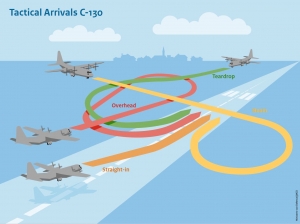 A C-130 Hercules will perform evening flights over the Netherlands in the period from 8 to 19 March 2021, with the last landing being made at 11 pm at Eindhoven Air Base.

No flights are scheduled for Friday March 12, the last landing will be at the end of the afternoon on Friday March 19. There is no flying at the weekend.

Tactical approaches
Tactical approaches to Eindhoven air base are also practiced during the evening flights. The airport is then approached from an unexpected direction, after which the landing is usually initiated after a short turn. A tactical approach is performed in areas of enemy threat. By flying low and not according to a usual pattern, the possibility for an enemy to fire at the aircraft is reduced.