Exercise Falcon Leap and Market Garden from Eindhoven Air Base

From 6 to 17  September 17, 2021 the exercise Falcon Leap will take place. During this exercise, paratroopers and aircraft will depart from Eindhoven Air Base. Afterwards, on September 18, aircraft will take off from the airbase to participate in the commemoration of Operation Market Garden.

Exact times and locations of the parachute jumps will not be released in advance due to the safety of the spectators and parachutists.

Falcon Leap
Exercise Falcon Leap lasts two weeks. During the first week cargo drops will be performed over Marnewaard, Deelen and Schaffen in Belgium. Transport planes from the US, Poland, Italy and the Netherlands will take part. All planes depart from Eindhoven Air Base. The flights take place within the regular opening hours of the airbase.

Dakota
The second week is dedicated to the dropping of paratroopers over Marnewaard, Houtdorperveld, Deelen, Heteren, Ginkel, Renkum and Hechtelse Heide in Belgium. Also this week, all aircrafts depart from Eindhoven Air Base. The aircraft are from the same countries as during the first week, supplemented by an aircraft from Germany. In addition, two M28/SC7 aircraft and a historic C-47 ‘Dakota’ will fly their own flight programme. Also in the second week, all flights will take place within the regular opening hours of the airbase.

Operatie Market Garden
On Saturday, September 18, the aircraft will take part in the commemoration of Operation Market Garden. Paratroopers are then dropped on the Ginkel Heath. The aircraft will depart from Eindhoven Air Base at 9.30 am. The last aircraft is scheduled to return at noon. 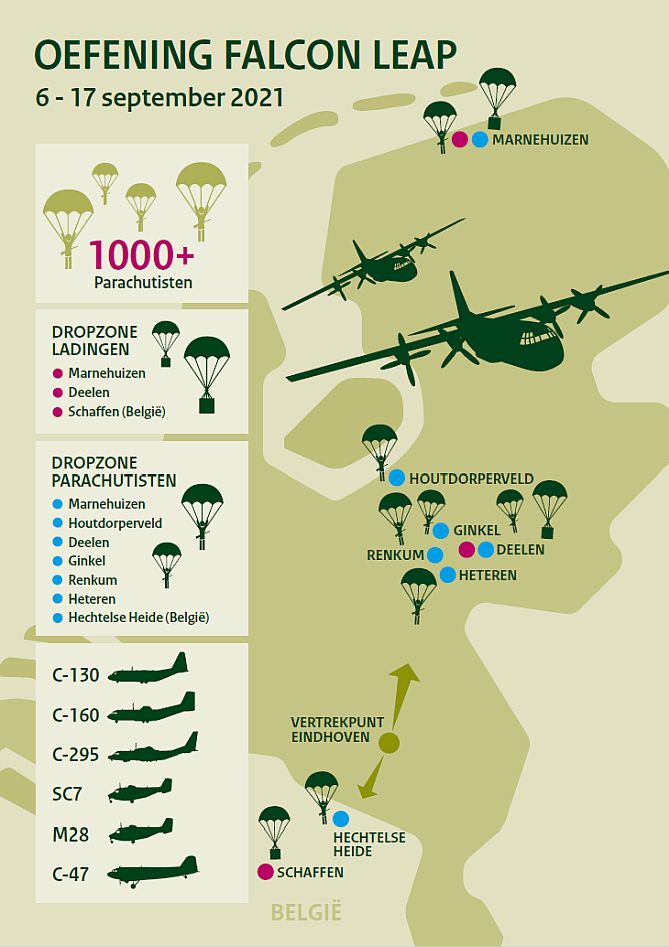