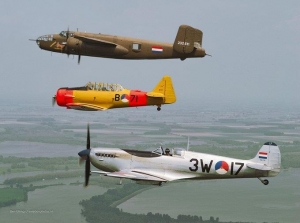 From July 1, 2021, the runway at Gilze-Rijen Air Base will be renovated. For this reason, a number of aircraft of the Royal Air Force Historic Flight are temporarily coming to Eindhoven Air Base. The aircraft will be flown over from Tuesday, June 29.

The aircraft will remain at Eindhoven Air Base for approximately three months. During that period they will fly according to the rules that apply to recreational traffic. This means that the planes can fly from Monday to Friday from 8 am to sunset and on Saturdays, Sundays and Christian holidays from 10 am.

Twitter channel
The flight movements are announced on the Twitter channel of the Royal Netherlands Air Force Historic Flight. Probably five aircraft will come to the airbase, including the B-25N Mitchell, Noorduyn AT-16-ND, Harvard IIB and Spitfire.

Source (including photo): Eindhoven Air Base.