Houses for sale or rent in Meerhoven 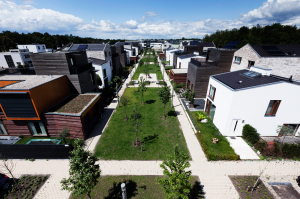 Meerhoven consists of five characteristic neighbourhoods: Bosrijk, Grasrijk, Meerrijk, Waterrijk and Zandrijk. Each neighbourhood has its specific urban design characteristics. Park Meerland forms the green heart of the district. Meerhoven has various facilities such as a shopping center, sports facilities, education, childcare and medical care. By public transport you are in the heart of Eindhoven within about 20 minutes. The center is also easily accessible by bike, thanks to the good cycling routes. With a good connection to the A2 and Eindhoven Airport a stone’s throw away, other European cities are also easily accessible from Meerhoven.

Interested in buying or renting a home in Meerhoven? Check out the links below. There are no more free lots available in Meerhoven.

PUUR Living in Meerhoven
The ‘PUUR Wonen in Meerhoven’ plan consists of 56 homes divided into three clusters with courtyards.

The New Mess
Construction project consisting of 18 homes on the site of the former officers’ hotel and the mess (dining room) in Bosrijk.

Bying an apartment in Meerrijk
In the center of Meerhoven several apartments are for sale.

Well-being and spatial quality
With the welfare policy, the municipality of Eindhoven is trying to create a pleasant and attractive cityscape.

Permits
All information about permits.