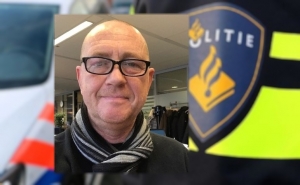 After nearly 49 years of service, local police officer Dick de Heus says goodbye to the police and the Meerhoven district. He is succeeded by Erwin van Melis.

Dick de Heus was active since November 2009 as a local police officer in Meerhoven and in the Landsard area. Later the entire airport area was added. Because of the retirement of Dick de Heus, Erwin van Melis takes over his duties.

Introducing
Erwin van Melis: “I have been working with the police since 1999. Before that I worked as a general investigating officer at the Royal Netherlands Marechaussee. Ten years ago I became a ocal police officer in the Stratum district. Due to the departure of Dick de Heus I was asked to succeed him as of June, 1. I’m definitely going to tackle this with verve. Given the size of the area, my experience gained in recent years will be very useful. Every local police officer has one or more additional tasks. I have an addiational task as a motorcyclist and an internet investigator. Both come in handy in Meerhoven. During the weekends, I support our criminal investigation department where necessary.”

Contact
“As a local police officer, I have realized for years that our biggest source of information are the citizens themselves. Therefore do not hesitate to report what you want to say in the police field. Whether it is a suspicious situation or a question about certain matters. You will always receive an answer from me or I will refer you to the appropriate body. For the sake of clarity: if you encounter a suspicious or urgent situation where the presence of the police is required immediately, call 112 (urgently) or 0900-8844 (less urgent). If the police are not needed immediately but you want to bring a problem to my attention, please contact me via the contact form or call 0900-8844 and leave a callback request for me. I will contact you as soon as possible. I work 32 hours on an irregular basis so sometimes it takes a while.”