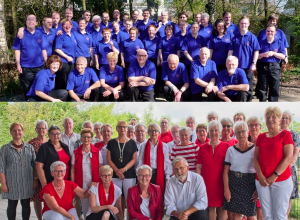 Sunday July 10, 2022 from 2.30 to 4 pm the Alexanderband from Veldhoven and the Meerhoven choir Zangrijk will give a concert in the outdoor area at De Hangar, Meerbos 4 in Meerhoven. Everyone is welcome and admission is free.

Alexanderband
The Alexanderband consists of people with intellectual disabilities. In 1976 the band started with 20 people as the school orchestra of the Prince Willem-Alexander School in Veldhoven. Since 1989, the orchestra has been housed in a separate foundation and members who have no affiliation with the school are also admitted. What started small, grew into a huge organization with about 40 members and about as many volunteers.

Zandrijk
The Zangrijk choir will celebrate its fifth anniversary in September 2022 and consists of Meerhoven residents 50 and older. It started as a song table for new residents eager to meet others. In the meantime, this has grown into a choir that sings every Thursday morning in the canteen of DBS.