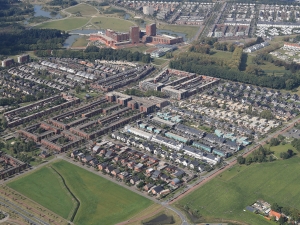 The municipality and the police want to realize a police facility at the border of Grasrijk. In 2019, this involved 1,250 police officers and the facility could be fitted into the existing infrastructure (see also the Wijkinfo of December 2019). In the meantime, the size of the planned facility has increased significantly. According to the latest findings, this will involve around 2,000 police staff from various departments, including the Mobile Unit, and 520 students from the Police Academy on a daily basis. Also a detention centre (for short stays), a shooting range and a training center are planned. Space is needed for around 1,000 parking lots for staff and visitors. There is also the possibility of a ‘height accent’ with a maximum height of 45 metres (comparable with a building of approx. 15 floors) on thesouth side of the site. The police facility has no public function. So there will be no police station for filing reports and the like.

Decision
In June 2021, the Board of Mayor and Aldermen (BMA) agreed with this plan. Residents in part of Grasrijk and Bosrijk received a ‘Wijkinfo‘ from the municipality that month. The municipal council has been informed by means of a Council information letter.

Oude Sliffertsestraat
To make all these developments possible, the municipality and the police want to relocate the Oude Sliffertsestraat to the outer side of the territory. Two variants have been devised for this: a western and an eastern variant. In order collect the opinion of the neighbourhood, the municipality called in a research agency. At the end of October and the beginning of November, the agency held 134 conversations with shoppers, road users and local residents.The result have been published in a report. According to the BMA, these conversations have not resulted in a clear conclusion about a preference. Therefore, it was decided this week that the Oude Sliffertsestraat will be moved to the residential area (the western variant). According to the BMA, this variant is cheaper, shorter and more environmentally friendly. Moreover, in that case, the police will have more space. Local residents have been informed about the decision via a Wijkinfo. The road can only be moved once the zoning plan is irrevocable.

Quality of life
A salient detail is that both alternatives were already presented to the neighbourhood in May 2021. However, this did not give the desired result for the municipality and the police. Over 98% of the more than 500 respondents supported the advice given by the sounding group of residents and the Board of Residents’ Association Meerhoven. They advised – indepedent from both alternatives – to first thoroughly investigate the effects on the quality of life by the arrival of the intended police facility and to seriously include the input of the neighbourhood in the investigation. Interviews recently conducted by the research agency also revealed that residents are particularly concerned about the arrival of the facility and would have liked to have been more involved in the plans. Nevertheless, in June 2021 the BMA decided that the police facility would be built without further investigation or consultation with the neighbourhood. According to the BMA, the police threatened to choose another city if the decision was further delayed.

With the most recent decision of the BMA to move the Oude Sliffertsestraat towards the neighbourhood, the earlier advice of the sounding group and the Board of Residents’ Assocation Meerhoven is again fully ignored. See the excerpt from the advice below.

Position
As known, both the sounding group and the Board of Residents’ Association Meerhoven are in principle positive about the realization of a police facility as outlined in the Wijkinfo of December 2019. Since then, however, the police have been making increasing demands, including a doubling of the number of police staff and students, closing the site (in combination with an extra exit on the north side) and relocating the Oude Sliffertsestraat. The police also deviate from the original plan area and the municipality apparently allows this. The great willingness of the municipality to comply with all the demands of the police is in stark contrast to the way in which the municipality has so far dealt with the input of residents. As the Board of the Residents’ Association Meerhoven, we find it unacceptable that the BMA takes hasty decisions for economic reasons, without thoroughly investigating the consequences for the liveability in the neighbourhood.

City Council
Since the BMA has so far ignored the advice of the sounding group and the Board of Residents’ Assocation Meerhoven, at the end of November we called on the City Council by letter to urge the BMA to involve the neighbourhood in the plans and to revoke the BMA’s decision. This with the aim to find a satisfying solution for all parties. Both the sounding group and the Board Residents’ Assocation Meerhoven are still open to this. In our view, this is a more attractive route than a lengthy legal process that seems to become inevitable due to the current course. In a written response, the BMA has stated that it has conducted a careful consultation process and regrets that it cannot convince us of this. On Tuesday 22 February 2022, the police facility will be on the agenda of the City Council. At the beginning March 2022, the police facility was once again on the agenda of the City Council. A majority of the council supported the position of the BMA that the participation process had gone well and that the facility should be built no matter what. This is not a surprising result, since the coalition parties usually give the BMA their unconditional support. The result is also in line with earlier reports in the Eindhovens Dagblad about the functioning of the council. As the board of Residents’ Asssocation Meerhoven, we nevertheless felt that we had to make the most of every opportunity to arrive at a supported solution for the neighbourhood. We regret that this has not been possible so far and that legal proceedings seem to be inevitable.

Alternative location
As an alternative location for the police facility, residents have repeatedly pointed to the vacant terrain behind P+R Meerhoven and Hotel Campanille. Earlier, the municipality indicated that the terrain is not available for the police, but is intended as a “shop window for Brainport near the A2”, whereby “top international companies with a supra-regional function” should be considered. The recent plan of the municipality to realise a few hundred houses on this terrain for a period of 30 years proves that the ambitions are perhaps too high. This was reason enough for us as a board to write this letter to the municipality to draw its attention once again to the idea of making the site available to the police. We also suggested that the temporary housing could be realised on Land Forum in close consultation with the neighbourhood. Last Friday, the municipality informed us by letter that it did not want to go through the preparatory process for the police facility again and therefore will stick to the Land Forum location.

Draft zoning plan
The realisation of the police facility and the relocation of Oude Sliffertsestraat require an amendment to the zoning plan. The procedure has started with the publication of the draft zoning plan. Anyone can submit a view on the plan in the period 30 June – 10 August 2022. Based on all submitted views, parts of the plan may be amended. The (amended) zoning plan will then be submitted to the municipal council for adoption. Anyone who has submitted a view and disagrees with the council’s decision can then appeal to the court.

View Residents’ Association Meerhoven
During the General Meeting of June 20, 2022, it was decided that the Board of Residents’ Association Meerhoven would draw up a view on the draft zoning plan Land Forum (police site) in accordance with the position as expressed above. On August 3, 2022, the view has been sent to the Municipality of Eindhoven on behalf of the association. The view was also sent on behalf of local residents who authorized the Board to do so. The latter is important because parts of the zoning plan can only be disputed by local residents in a possible appeal procedure.

Example letter
If you have not authorized Residents’ Association Meerhoven as a local resident and (still) want to submit a view yourself, you can do so until Wednesday August 10, 2022. We recommend that you use our example letter (in Word or PDF). This letter also contains instructions on how to submit your view.