Loose facade panels in Meerhoven: ugly, but not dangerous 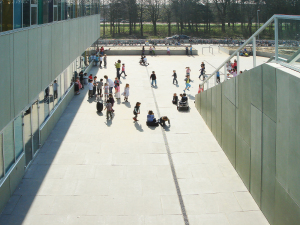 A few years after the completion of the school building, plates of the facade of De Startbaan peel off. The school principal and the municipality do not see any danger, a local resident does.

“Irresponsible!”, says a concerned local resident. He points to the facade of Saltoschool De Startbaan on the Meerbos in the Meerhoven district. Four facade panels have disappeared in a row on the first floor. Mounting strips hang loose from others. The man, who does not want his name in the newspaper, is angry. “Imagine when the wind picks it up again! Do you know that the children below are waiting in the morning before they can enter?”