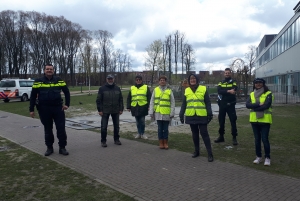 On Tuesday, April 6, 2021, the police held a neighbourhood prevention action in Meerhoven, in cooperation with the Meerhoven Neighbourhood Watch Team.

The action was set up partly due to the increasing number of burglaries in Meerhoven. The last few weeks the neighbourhoods Zandrijk, Waterrijk and Grasrijk were particularly affected.

Open gates
“We have looked at open doors, garages and garden gates. It was noticed that almost all central gates, which give access to the back yards, were not locked. In many cases the gate was even open. A nicer invitation for the thieves’ guild hardly exists,” said a police spokesperson. “In many cases, this allowed us to enter gardens and storerooms unimpeded and we could have taken several bicycles and other valuables.”

Advice
Residents are advised to lock doors, garages and (central) gates and remove the key. For more tips, visit the police website (in Dutch).

Contact
In case of suspicious situations, contact the police via the general number 0900-8844. In case of emergency call 112. Area agents Erwin van Melis and Marieke Bakermans can also be reached by email at and .