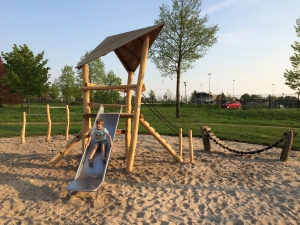 Two new play sets have been placed on the playground near the entrance of Sportpark Meerhoven (Het Schaapsdijk 109).

Due to the realization of the Beweegpark Meerhoven two original play sets had to give way. These would initially be moved to another part of the playground. However, the play set was so rotten that it could no longer be reused. That is why new devices have now been installed. The playground between the streets Grasstrook and Grastapijt will soon also have a new play set.