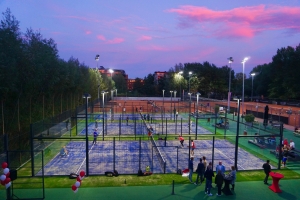 Hans Prein, chair of TV Meerhoven: “Padel is a racket sport and is very similar to tennis and squash. The sport is spectacular, fast and dynamic. Due to the popularity of this sport, we have made every effort to create four padel courts. And thanks to the club members and sponsors involved, we succeeded! The courts will be officially opened on Saturday September 3. During that weekend, we will organize several activities to introduce the neighbourhood to the sport of padel.”

Free padel clinics
The opening weekend starts on Saturday, September 3 at 4 pm with free padel clinics. Under the guidance of experienced padel trainers, both children and adults can get acquainted with padel in an accessible way. Padel rackets and balls will be available during the clinics. You need to bring your own sports clothes and shoes. You don’t have to be a member of TV Meerhoven to attend the clinics. Registration in advance is not necessary.

Official opening
At 6.45 pm the padel courts will be officially opened. Afterwards, at 7 pm, a demo match is scheduled. After the demo match the padel trainers will challenge everyone and there are prizes to be won. The day will be concluded with a party evening with various DJs. The party starts at 8 pm. Everyone is welcome.