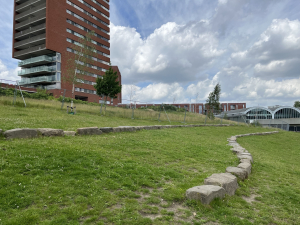 Monday, June 13, 2022, the municipality of Eindhoven will start repair work on the earth wall located between Meerplein and Meerbos. The work is expected to be completed by July 15, 2022.

In 2015, an earth wall was constructed against the concrete wall at the rear of the shops and apartments on Meerplein. For constructive reasons, the space between the concrete wall and the earth wall was filled with rigid foam at the time. At the end of 2020, large holes appeared locally in that space. The area is immediately cordoned off with construction fences for safety reasons.

Solution
In the coming weeks, a platform will be installed on the top of the earth wall and the concrete wall. In addition, an extra fence will be placed around the platform to prevent unauthorized persons from entering the roof via the earth wall.

Meer informatie
For questions and more information, please contact Rob Verwijst, implementation coordinator of the Municipality of Eindhoven at number 040 238 29 59. During the execution of the work, you can contact the executor of the work, Sell van Straten of Van Beers at number 06 51 133 816 .