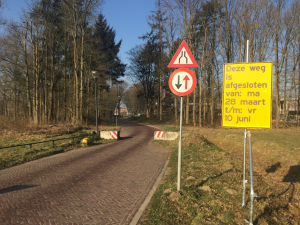 As of Monday 28 March 2022, the municipality will start with the refurbishment of the Bosrand. The work will be carried out in three phases. The first phase will start from the entrance at the Zandkasteel. The work is expected to be completed by Friday 10 June 2022.

The Bosrand is currently still a temporary road. After fifteen years, it is time to furnish this road with a permanent layout. The starting points for the design were discussed more than three years ago with the residents’ organisations at the time (Residents’ Association Grasrijk and Neighbourhood Association Zand-, Bos- en Meerrijk). Residents were also able to respond to the plans at that time. On the municipality’s website you can read which adjustments will be made. The location of the road will remain the same as now; only the layout will change.

Diversion route
As of Monday 28 March, car traffic will be diverted with yellow signs via Park Forum and Meerhovendreef. See also: https://live.andes.nl/eindhoven. Due to internal miscommunication at the municipality, the activities and diversion route were not agreed in advance with the Meerhoven Residents’ Association. In addition, only residents in Bosrijk received a neighbourhood newsletter.

Alternatives
In recent days, various suggestions have been made by residents for a shorter diversion route:

Residents’ Association Meerhoven has discussed these suggestions with the municipality, but after the municipality’s explanation came to the conclusion that they are not realistic.

Explanation of the municipality
For the use of the bus lane the crossings at Zandkasteel and Grassavanne would have to be redesigned. The municipality considers these adjustments disproportionate to the temporary inconvenience of detours. The use of the parking garage for through traffic (more than 2,000 vehicles per day) is not a good solution from a traffic safety point of view either. The same applies to a temporary crossing at Sliffertsestraat or Echt Welschap. The streets are not equipped to handle relatively large amounts of traffic, which would lead to unsafe situations.

Another alternative
Residents’ Association Meerhoven also suggested realising a temporary crossing (with concrete slabs) after phase 1, at the level of the foot/cycle path between the Bosrand and the Bosuil. The municipality indicates that building developments have already started at this location, which means this option has unfortunately been discarded as well due to a lack of space.

Advice
Although a detour is inconvenient,  everyone is asked to respect the diversions route via Park Forum and Meerhovendreef and especially not to use the bus lane and cycle paths. The inconvenience and unsafe situations this causes do not outweigh the detours. For short distances, preferably use the bicycle. For shopping, the Meerhoven shopping centre is accessible by car from both Grasrijk and Zandrijk. Residents travelling to the N2 can best use the nearest exit (Meerhoven Noord or Meerhoven Zuid).