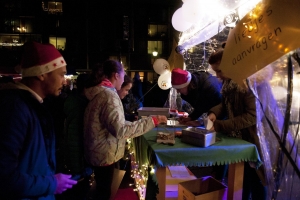 Primary school ‘t Slingertouw in Meerhoven has raised more than 15,000 euros for the Ronald McDonald House in Veldhoven.

At ‘t Slingertouw the week before Christmas is traditionally focussed on charity. This year the Ronald McDonald House in Veldhoven was chosen. It houses parents, brothers and sisters of children who are hospitalized at the Máxima Medical Center. The House receives no subsidy from the government and is dependent on donators, sponsors and volunteers.

Glass House
Children and their parents were encouraged to collect money in their own way before Christmas. For example by baking cookies and selling them or holding a mini sponsor run. The school even had its own ‘Glass House’ where songs could be requested from the DJs. The total amount of money raised was announced on Friday, 22 December. The exact amount was 15,561.79 euros.