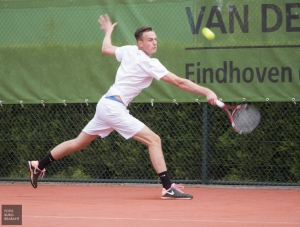 On Saturday 1 and Sunday 2 September 2018 Tennis Club Meerhoven celebrates its 15th anniversary with various activities for members and non-members.

Stefan van Bogget, chairman Tennis Club Meerhoven: “Our association was founded on August 6, 2003. We did not have tennis courts and other facilities at that time. After negotiations with various parties, a tennis park with six illuminated all-weather courts, changing rooms and a pavilion was realized a year later. Meanwhile, TV Meerhoven has grown into a cozy and sporting association that also plays an important social role in the neighbourhood. More and more children and adults are discovering the tennis sport and opting for Tennis Club Meerhoven.”

Tennis clinics
To allow non-members to taste the atmosphere at Tennis Club Meerhoven, on Saturday September 1, tennis clinics will be given, both for youth (starting at 2.45 pm) and for adults (starting at 3.45 pm). Rackets are available and pre-registration is not necessary. After the tennis clinics have ended, interested parties can go to the clubhouse for questions and information about membership and training. Location: Waterfont 2 (extension of the Waterlinie) in Meerhoven.

Sjeng Schalken
On Sunday, September 2, the finals of the club championships will be played. Former tennis topper Sjeng Schalken also provides a tennis clinic and a demonstration competition. The activities on 2 September are for members only.

More information
Look for the complete program on the website of Tennis Club Meerhoven (in Dutch).