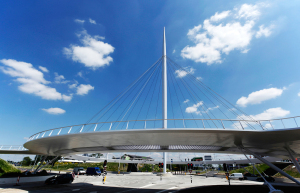 The municipality of Eindhoven will not place fencing between the bicycle paths and the embankments of the Hovenring bicycle roundabout. Last week, a woman from Veldhoven had a serious fall here after being driven off the road by a young cyclist.


Sylvia Leidekker cycled at full speed off the embankment, landing face-first on the asphalt and sustaining serious injuries. Meanwhile the boy has reported to Sylvia and her husband Arold and has offered apologies and a bunch of flowers. According to the boy there was no intention and he did not realize that the collision on the path had such a serious outcome.